Traveling by train in Europe is convenient, cost-effective, and kid-friendly. In fact, riding the rails beats flying or driving a rental car every time. You won’t encounter the long security lines and cramped seating conditions of air travel, and, unlike motorists in foreign countries, you won’t have to navigate unfamiliar highways, decipher signs in a language you don’t understand, or remember to point the car down the correct side of the road. Plus, train travel is just plain fun. Here’s what families need to know about planning trips, purchasing tix, and enjoying the ride on the railways of Europe. 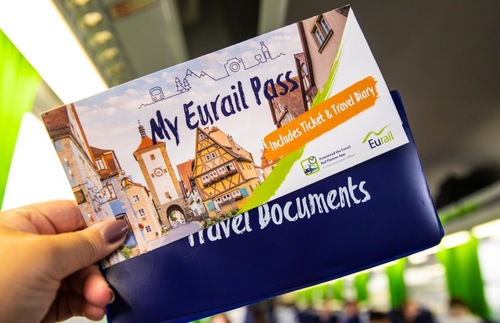 With a Eurail Pass, you and your family have access to some 40,000 destinations in 31 European countries for visits lasting from three days to three months, depending on the plan you buy. Nearly all of Europe’s rail lines honor the pass, meaning you can hop on and off trains across the continent without having to line up to purchase tickets for individual segments. Get this one pass and you’re good to go for the whole trip. 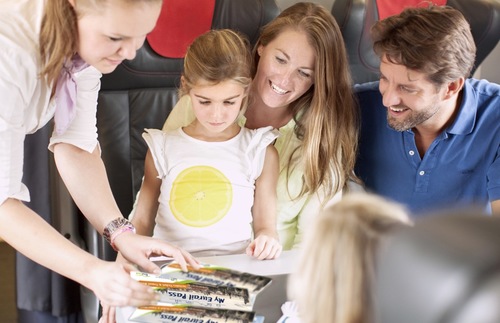 Eurail Pass Options: One Country or a Bunch?

Which Eurail Pass should you buy? Depends on whether your crew wants to stay within a single country or see several of them. The One Country Pass with the flexi option allows train travel within one nation for three, four, five, six, or eight days in one month, during which time you can board as many trains each travel day as you like. For pass purposes, Scandinavia—Denmark, Norway, Sweden, and Finland—counts as one country, as does Benelux—Belgium, the Netherlands, and Luxembourg. 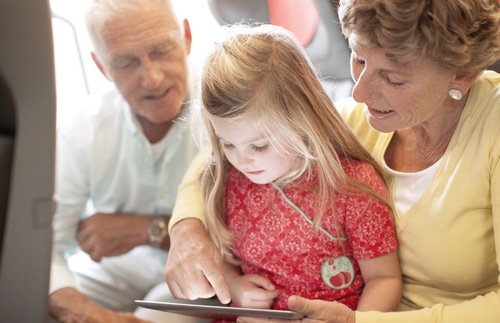 There’s nothing free in air travel nowadays unless you count the pretzels. But with a Eurail Pass, two kids aged 11 and younger travel for free with one paying adult. What’s more, riders between the ages of 12 and 27 receive a 23% discount off the adult fare. When was the last time you got a travel discount for your post-college-age kid? A further incentive for multigenerational European train trips: Passengers age 60 and older ride with a 10% discount. (Before purchasing, it’s wise to compare the cost of Eurail Passes with airline fees and rail fares for individual trips.) 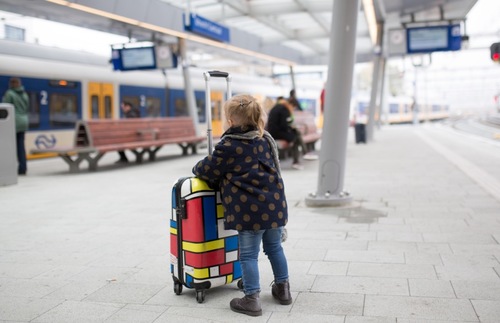 Most European trains don’t impose luggage limits, so don’t expect any extra fees for your gear. The exception is Eurostar trains offering high-speed service between London and the continent via the Channel Tunnel. Eurostar allows two large bags and one small bag per person.

But even for the other rail systems it’s smart to pack as lightly as possible, since official help with suitcases is noticeably absent at European stations. Besides, if you’re flying to and from the United States, you’ll need to stow your bags on a plane at some point anyway. Once aboard the train, try to keep your luggage in view. Backpacks and small bags fit overhead; larger suitcases can be stowed at the end of the coach. For extra peace of mind, you can latch your bag to the luggage stand with a cable and lock. 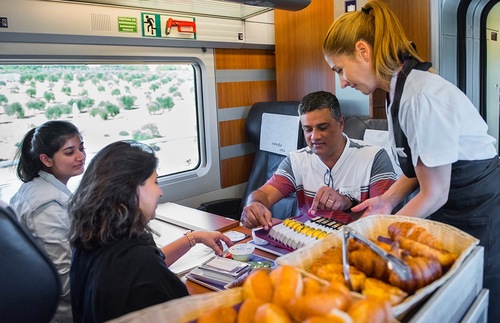 When buying your pass, you’ll need to pick between first and second class. Costlier first class comes with wider seats and more legroom. Depending on the route and time of day, those in the more expensive seats get a meal, too. Families traveling in first class have the benefit of double seats that sometimes face each other across a table, creating a handy space for coloring, snacks, and family board games.

A Eurail drawback: You cannot mix classes on a single Eurail Pass. For example, you can’t opt for first class on a long train ride, then book second-class seats for short excursions where the extra comfort may not be worth the extra price. Compare the cost of an all first-class pass for you and your kids (remember, up to two children ages 11 and younger travel for free) with the cost of buying one Eurail first-class ticket for the long haul and one Eurail Pass for the short rides. 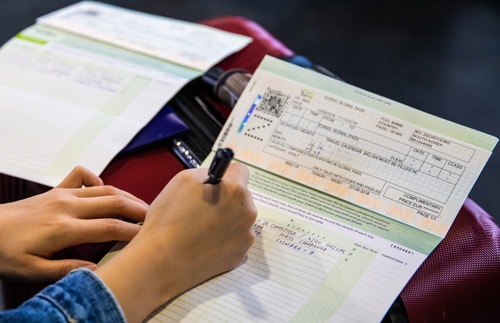 When and Where to Book

Eurail Passes may be purchased up to 11 months in advance of travel. Typically, a hard copy of the pass will be mailed to you. One fee covers all passes purchased at the same time and sent to the same address. You can obtain passes via Eurail’s website or through authorized travel agents. Although some European rail stations sell certain passes, Eurail estimates the cost to be 20% higher than buying online ahead of time. Like airline fares, Eurail prices fluctuate and may increase as the date of travel nears, so buy your train tickets as soon as you’ve sorted out your flights to Europe.

Passes must be activated before your first train ride. Either request a preactivated pass at the time of purchase or allow extra time at the first station to activate your pass. 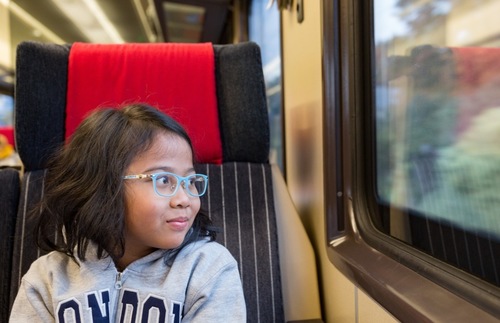 Youngsters under age 4 who sit on a parent’s lap don’t need their own Eurail Passes. But that sounds uncomfortable on a long trip, so you may as well get those kiddos their own seats with a Eurail Child Pass—after all, it’s free with an adult ticket. To obtain the free child fares, simply list children ages 11 and younger (up to two kids per adult) on your Eurail Pass. 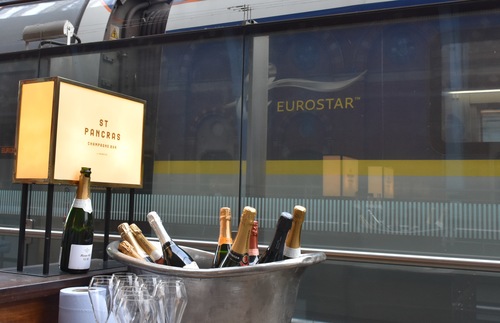 Eurostar’s sleek yellow-and-blue trains with their rocket-nose locomotives look almost elegant, especially when poised against the champagne bar at London’s St. Pancras station. At a top speed of 186 miles per hour, the Eurostar zooms from London to Paris or Amsterdam (with stops in Brussels and Rotterdam) in under four hours. Tell children concerned about being underwater that of the 361-mile journey, the Channel Tunnel is a mere 23-mile segment that takes about 20 minutes to pass through. Kids sensitive to changes in air pressure might feel their ears pop. The tunnel’s deepest section lies 246 feet below the surface—or the equivalent of 107 baguettes stacked end to end, according to the train’s video monitor. Allow at least 30 extra minutes to check-in and go through passport control. 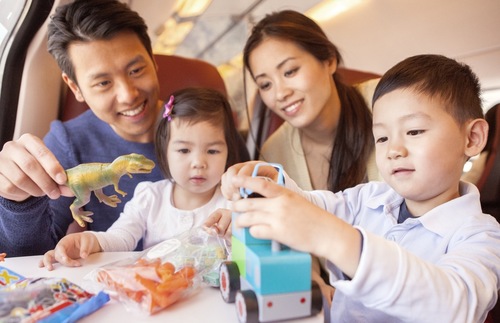 On some Eurail routes, families receive extra amenities, such as special compartments for those traveling with small children, play areas, diaper-changing stations, and areas for nursing mothers. On Dutch Railways ICE International trains, look for the Kleinkindabteil, a compartment for families with tots aged 3 and younger, or the Family Zone, a play section for ages 4 and older. On SBB (Swiss Federal Railways), all double-decker InterCity trains on long-distance routes include a Ticki Park family coach, a jungle-themed play space. Bring a toy such as a squishy ball for rolling or a game with pictures (nothing language-centric to avoid confusion) so that your child can engage with new friends. By the time the train reaches its destination, your family might discover that getting there has its own rewards. 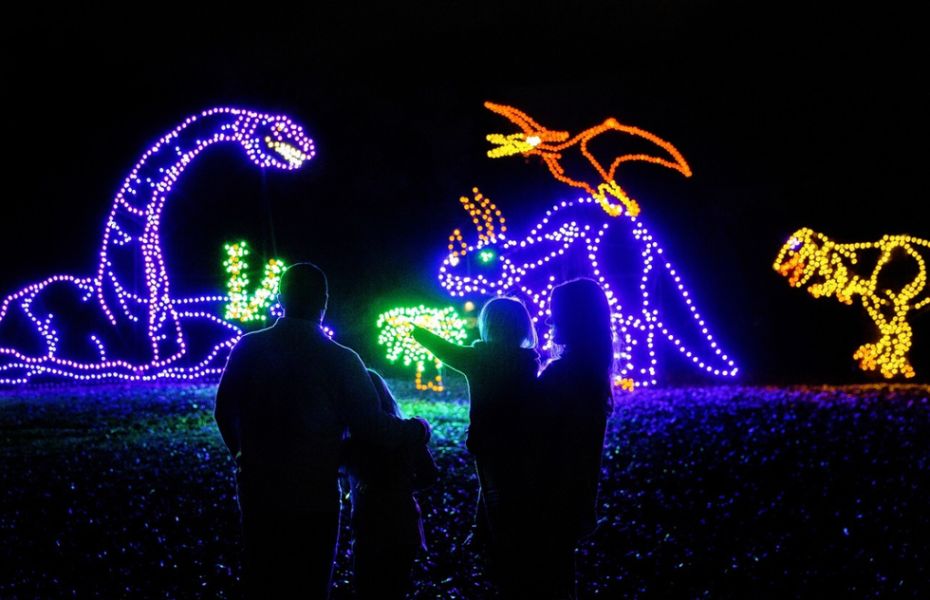 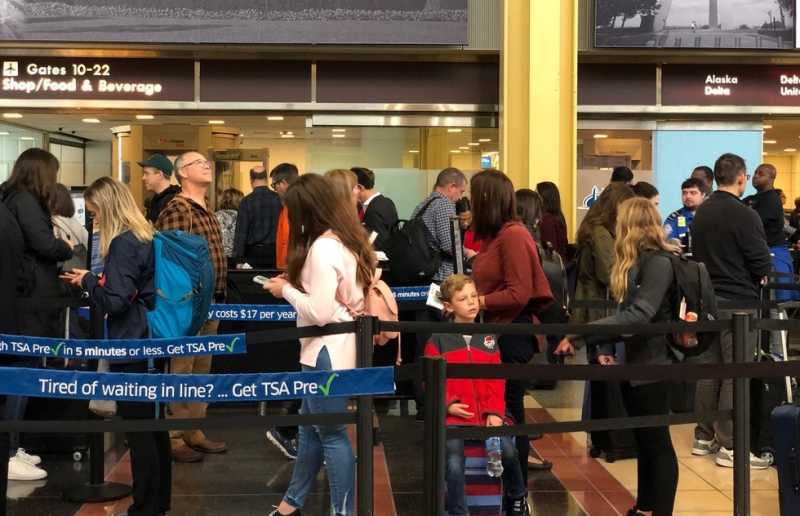 Frommers.com Can Kids Use TSA PreCheck with Their Parents? Sometimes. Here’s How To Know 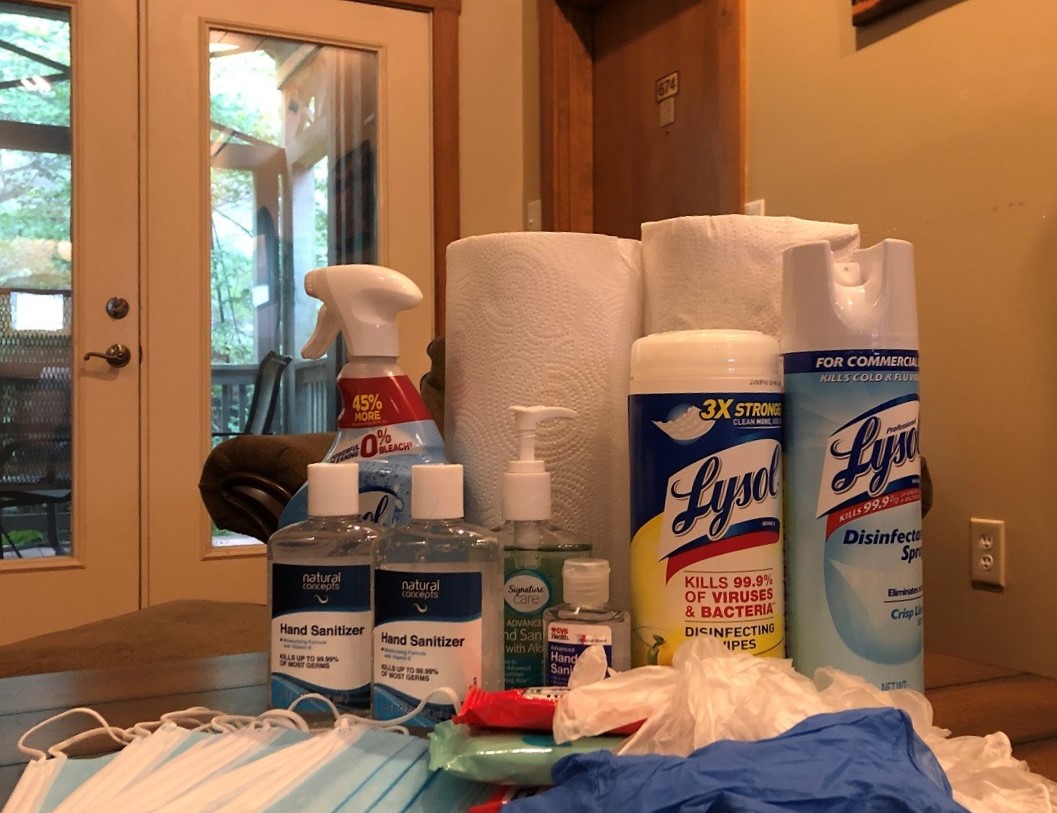 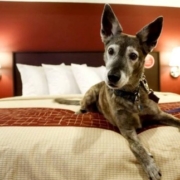 Frommers.com Which Are the Most Pet-Friendly U.S. Hotel Chains (And Which Ones Just Claim They Are)? 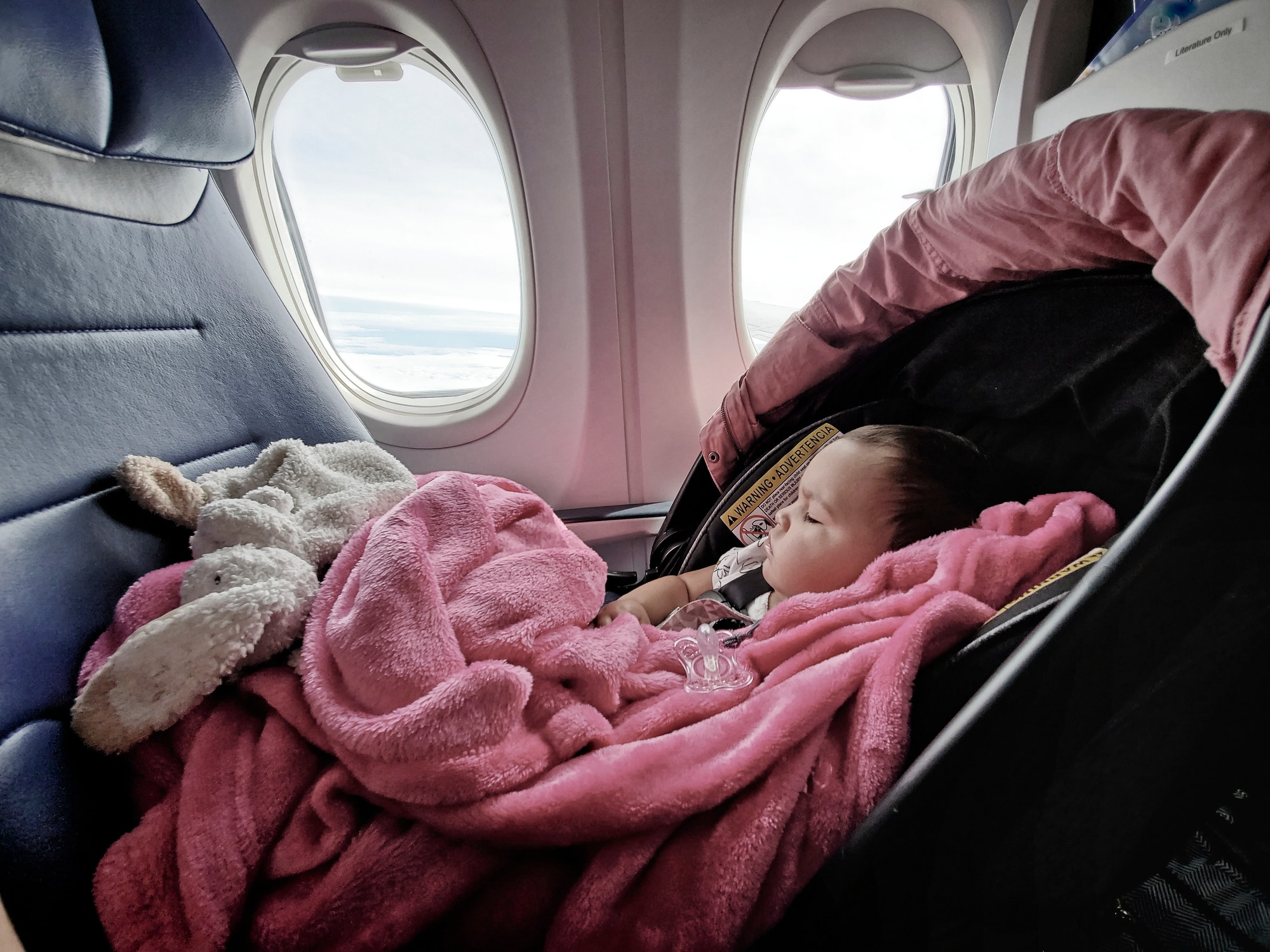 Frommers.com Not All Kid’s Car Seats Are Approved for Airplanes: Know the Rules 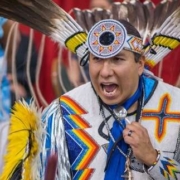